Montacute Pavilion is an interpretation of the garden pavilions at Montacute House, Somerset, England (Fig. 1) 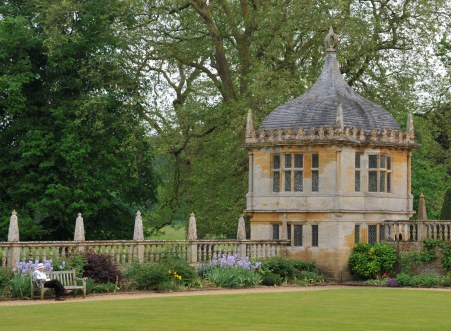 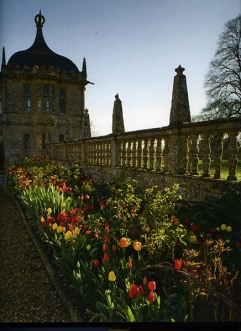 Garden beside the terrace leading to the right pavilion.

Montacute House is one of the most important Elizabethan houses in England, now the property of the National Trust.  There is a terrace at the front of the main house with on either side two pavilions built in about 1600. These were originally probably banqueting pavilions, although now there is nothing inside. Midway between them was an entrance gate, now gone. A similar arrangement is still intact at Hardwick Hall.

Montacute Pavilion is an accurate enlargement (120% bigger) of these pavilions, but with two main changes. The windows have been changed from the type with a semicircular bay with flat side lights to bigger rectangular bays of Elizabethan type such as are found in the main Montacute House building, and it has been extended on the street side to accommodate the master bathroom and the downstairs bedroom. This changes the look of the building somewhat: from the street, the effect is quite exotic; from the secret garden and the Chinoiserie fabrique it is more comlplicated, while the pure Montacute view is from the garden on the west side. 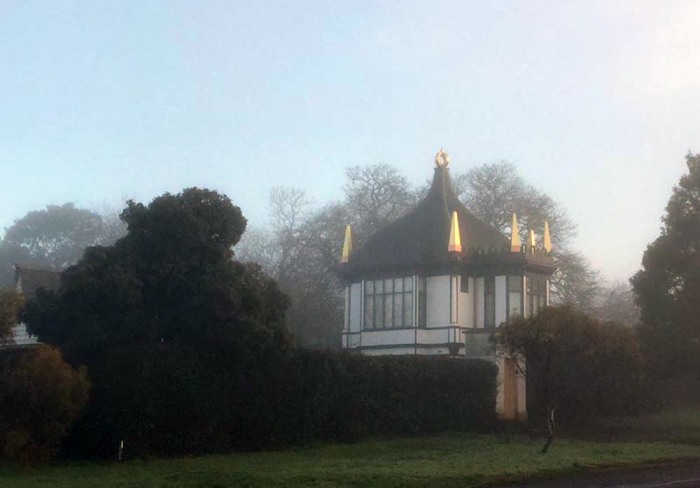 The intention has not been to create a replica of the Elizabethan building, but to take its form, and translate it into a building which is both a garden ornament and functional holiday accommodation, using (mostly) standard building materials. This is how the architecture of the past was made: by taking an admired model and adapting it to present-day purposes. This is what Andrea Palladio did when he created Veneto farmhouses in an antique/classical style. The original Montacute pavilions are of stone with slate roofs, but this has been translated into timber with a Colourbond corrugated roof. The building is, of course, timber framed, with the cladding made from Silvertop Ash, and the stringcourses made from treated pine.

Elizabethan architecture demonstrates an interesting interaction between traditional Gothic forms and a new Renaissance interest in Classical forms. The ogee curve (reverse curve) of the roof is a traditional Gothic form that was a favourite roof form in Elizabethan buildings. The radius of both convex and concave sections is 2800 mm. The original pavilions were dressed with classical columns at the corners and a classical entablature with modillions, topped by battlements. I found the battlements to be a little rudimentary, and so developed somewhat different ones based on those at another Elizabethan building, Stanway House in the Cotswolds. 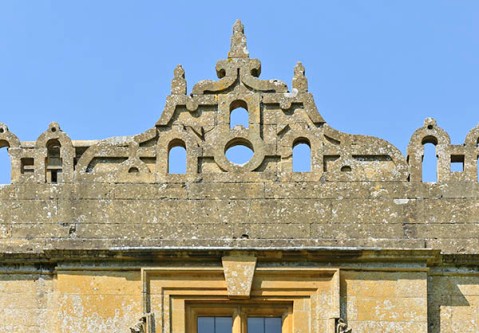 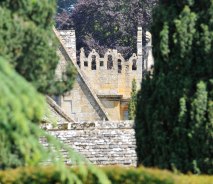 These battlements are made of solid Accoya timber. This is a form of treated pine made with radiata pine treated with vinegar. It is not widely used in Australia and is therefore relatively expensive, but there are plants in the Netherlands and elsewhere that produce it. It is both more durable and more stable than the usual treated pine, and has been used for building bridges in Europe. It is also non-toxic: the company that made them for me told me that their workshop spelled like a fish-and-chip shop when they were making them. The modillions were made in treated pine, cut from standard 75 x 200 mm sleepers. 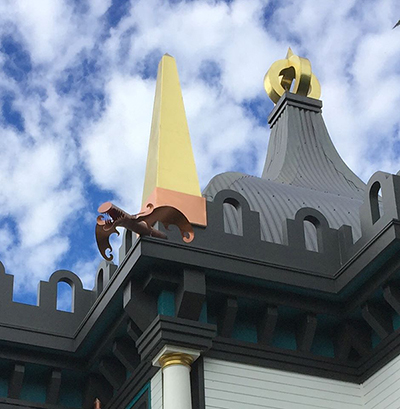 The feature that people find most striking are the obelisks and the finial on top, which are clad in brass and some copper. In the original pavilions these were of stone, but the translation into a timber building resulted in a different colouristic concept. Some people find them to be excessively exotic, especially the colour, suggesting other building typologies, but they are meant to add a festive note. After all, it is a place for enjoying oneself, and who needs drab? The dragon spouts are a bit of whimsy. They are the equivalent of Gothic gargoyles and are common in central and Eastern Europe rather than England (there is a seventeenth-century example in the Victoria and Albert Museum in London, and interesting examples, often remade, at Schloss Ambras, Innsbruck, Austria; Wawel Castle, Krakow, Poland; and at Schwäbische Hall, Germany.  Click here and here for more about these. Elizabethan buildings had long channel waterspouts (old photos of the Montacute pavilions show them, though they are probably not original). Click here for more about this. Mostly these were replaced with cast iron downpipes in the eighteenth century. These dragon spouts are functional, but not as the normal way of removing roof water (building rules do not permit it) which is taken by downpipes. However, should the downpipes be blocked the dragon spouts would come into play. The vases are not found in the Montacute pavilions but came about because the bathroom extension needed chamfered corner so as not to be too boxy, while the ground floor bedroom needed to be rectangular: the vases ease the transition, as well as providing visual interest from the bathroom, where they manage to look a kittle Art Deco. They are made of painted Accoya.